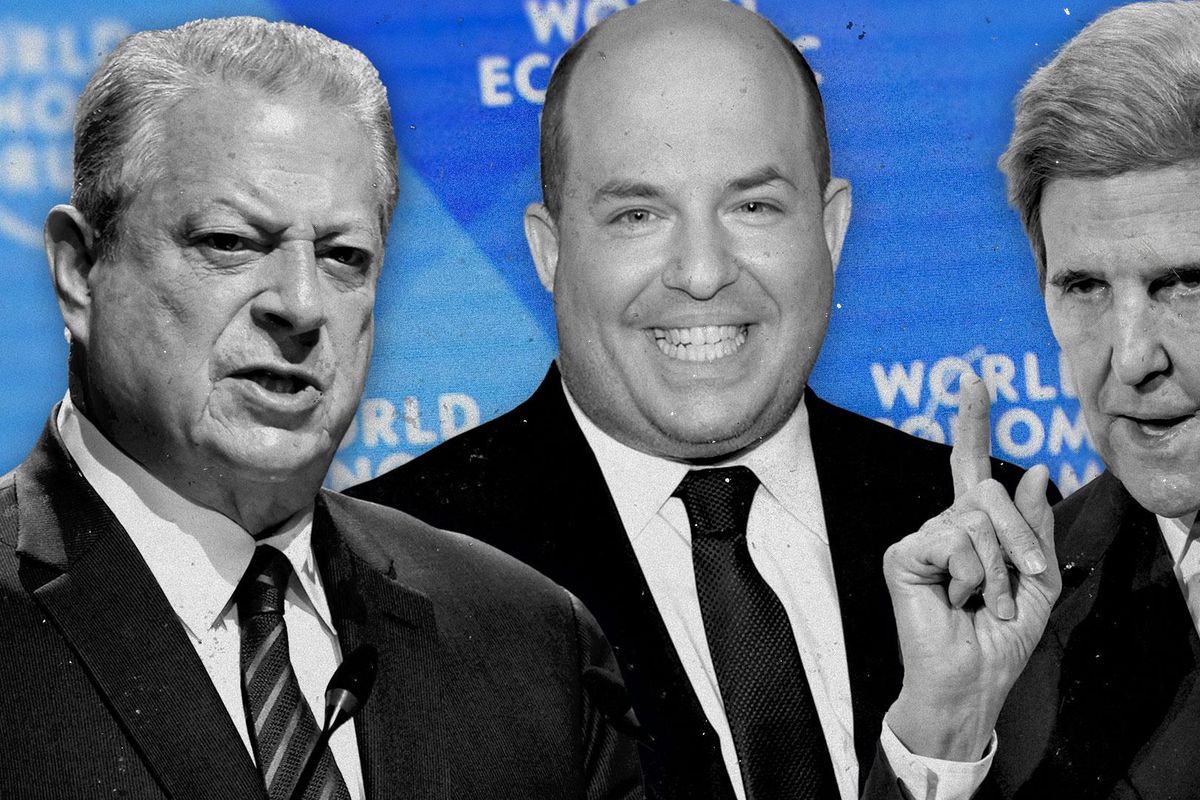 Glenn has been warning about the dangers of the World Economic Forum and The Great Reset, which is the WEF's goal to utilize the crises like the COVID pandemic to create a leftist Utopia. Now, these goals continue to take shape at the World Economic Forum summit in Davos. Here are five ridiculous moments from this year's summit that shed light on their ultimate vision Glenn has been warning about.

1. Ex-CNN host Brian Stelter hosts the WEF panel on "disinformation," calling for the criminalization of "hate speech" in the U.S.

The former host of Reliable Sources was fired from CNN in 2022 for raking in the network's worst ratings since 2019. CNN's CEO at the time, Chris Licht, accused Stelter of "drawing ire from conservatives" for misrepresenting the facts and propagating false narratives to demonize conservatives. Licht fired Stelter because he was a liability to CNN's attempt to "re-brand" itself as a "reliable" news source.

You would think the World Economic Forum could have found a more credible host for its "disinformation," than Brian Stelter, and it comes with little surprise Stelter's panel called for the continued censorship of conservatives.

Stelter asked his panel, "How does this discussion of disinformation relate to everything else happening today in Davos?"

Vice-President of the European Commission Vera Jourová answered "illegal hate speech" from right-wing extremists, and then called for the criminalization of hate speech in the U.S., asserting, "I think that we have a strong reason why we have this in the criminal law" within the EU.

As former Trump advisor Stephen Miller pointed out, Stelter's refusal to further challenge Jourová's call for censorship is indicative of his failed career as a journalist.

2. Al Gore warns of "rain bombs," "boiling oceans," and "xenophobia" as a result of climate change.

Gore's speech "speaks" for itself...

After asserting that we're creating an "open sewer" in the troposphere, Gore exclaimed:

That’s what’s boiling the oceans, creating these atmospheric rivers, and the rain bombs, and sucking the moisture out of the land, and creating the droughts, and melting the ice and raising the sea level, and causing these waves of climate refugees!Watch the latest video at foxnews.com

Does this sound reminiscent of the "Man-Bear-Pig?"

It wouldn't be a World Economic Forum summit if bugs didn't take center stage. Siemens AG Chairman Jim Hagemann said he was inspired by his 24-year-old daughter to stop eating meat to fight climate change and urged one million people to stop eating meat to balance out jet emissions—like the jets his fellow attendees used to travel to the conference?

Here's what he said:

If a billion people stop eating meat, I tell you, it has a big impact. Not only does it have a big impact on the current food system, but it will also inspire innovation of food systems."Watch the latest video at foxnews.com

Of course, finding "alternative sources of protein" means... you guessed it... BUGS. The EU is already cutting down on cattle farms and promoting the building of insect farms to initiate this "protein transition."

4. John Kerry calls Davos attendees a "select group" with an "almost extraterrestrial" plan to save the planet.

Kerry's opening speech at Davos shows the type of elitism the attendees believe about themselves. They are the "special ones" who can gather at a Swiss resort town to discuss how to "save the planet" and the "little people" who are too ignorant to have a say in the matter. His words speak for themselves:

When you start to think about it, it's pretty extraordinary that we — select group of human beings because of whatever touched us at some point in our lives — are able to sit in a room and come together and actually talk about saving the planet [...] I mean, it's so almost extraterrestrial to think about saving the planet [...] f you say that to most people, most people think you're just a crazy, tree-hugging, lefty liberal, you know, do-gooder, or whatever, and there's no relationship. But really, that's where we are.Watch the latest video at foxnews.com

Well, not everyone was amused...

Businessman and conservative Tim Acheson called Kerry’s words, "Liberal delusions of grandeur." Jordan Peterson also tweeted, "Who are you going to sacrifice to save the planet, @JohnKerry -- and do you think and how will you ensure that they have any say in the matter?"

5. Davos attendees traveled on more than 1,000 private jets to the conference.

Greenspace, an environmentalist research group, estimates the total emissions used by Davos attendees on their private jets while traveling to the conference is equivalent to "about 350,000 average cars."

Greenspace also found that 53 percent of all private jet trips were short-haul flights of less than 470 nautical miles that "could have easily been train trips." This comes amid the EU's push to ban short-distance flights and opt for train travel instead, which many continue to point out.

What once sounded like conspiracy theories are now taking shape amongst the global elites at Davos. As Glenn continues to shed light on the dangers of the World Economic Forum, here's how YOU can fight back against their goals that threaten our freedoms and democracy.